The open floor plan concept began becoming popular around the 1990s, and has been a staple of home renovations and homebuilding ever since. If you are thinking about building or renovating your home to include an open floor plan, there are several pros and cons to take into consideration.

Homeowners love the feeling of having a “great room” in their home, without the restriction of walls separating the rooms. It lets in more natural light, and allows families to interact and converse from separate rooms, makes entertaining easier. It provides that seamless “flow” from one living area to the next. If you have small children, keeping an eye on them is easier with an open floor plan. It allows for that visual connection that, otherwise, wouldn’t exist.

For some, this concept comes with a few surprises. Voices and other noises tend to travel, especially in multi-functional spaces that include a television, dishwasher or recreation area. Focusing on one thing can prove difficult with multiple activities happening at the same time. Fewer walls and corners also means fewer obvious storage areas so it’s important to plan accordingly if you have a lot of “stuff.” And taking down walls will also mean less wall space for decorative use. Additionally, the open space will have to be well-insulated, since a larger space now has to be heated and cooled

“’What’s in the wall?’ is usually the first question I hear when meeting with a homeowner about a renovation,” says Cape Associates Project Manager, Brendan Lowney. Before you begin tearing down walls, you must ascertain whether or not any of the walls are load-bearing. The bearing walls are those that run from the basement (if you have one) through the top floor, basically supporting the weight of the structure of the home. Brendan adds, “We have to take into account the cost associated with any structural issues whenever removing an interior wall—along with other items such as electrical switches, outlets, panels, any plumbing drains or vents, HVAC and central vacuum.”

“Connecting to existing plumbing and properly venting for a kitchen can be challenging. There’s a lot of snaking wires through finished surfaces to get to the open space,” adds Jon Ziperman, Project Manager in our Eastham office.

Inspiration for building or renovating to an open space is frequently centralized around the kitchen and ever-important island for entertaining. When laying out the island it is important to keep in mind the spacing between island and cabinets (recommended 42 – 48 inches) along with the space that added seating requires. “Defining the kitchen space is paramount and will dictate the flow to the next space for designing lighting, paint and other seating areas,” continues Brendan Lowney

Inspiration for building or renovating to an open space is frequently centralized around the kitchen and ever-important island for entertaining. When laying out the island it is important to keep in mind the spacing between island and cabinets (recommended 42 – 48 inches) along with the space that added seating requires. “Defining the kitchen space is paramount and will dictate the flow to the next space for designing lighting, paint and other seating areas,” continues Brendan Lowney. 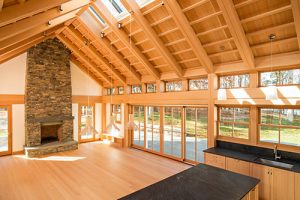 Even beyond the kitchen the general rule is to leave at least 3 feet of room for paths of travel. That can more than double space requirements for the width of a comfortable dining area. Carefully consider your most traveled paths when buying and placing furniture. Walking around a couch will seem easy at first, but after one or two years something simple as a few extra steps can make a big impact on your enjoyment of a space.

There will also be a need for multiple lighting options throughout all areas of the space, according to project manager Melissa Langford. “You’ll need task and mood lighting in all areas,” she says. “For example, you normally wouldn’t put kitchen lights on a dimmer, however, if you’re watching a movie in the living room you want to be able to turn those lights down versus off.”

Challenges aside, isn’t it great to watch your children or grandchildren play while you’re preparing dinner? …Slipping back to the fridge during a gathering without missing out on great conversation? …Keeping an eye on the big game while eating dinner at the table? Yeah, we love open spaces too.
If you’re considering an open space, either as a remodel or a new build, speak to a professional to see what the best plan might be for your home. Consider your vision, talk about your budget, and listen to their experienced recommendations. A collaborative effort always brings the best results!