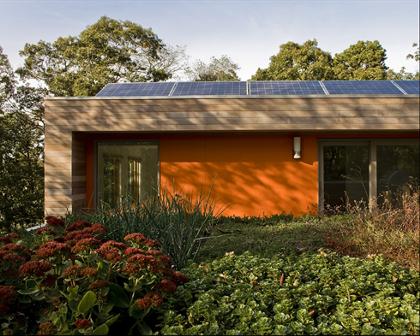 Tessa English remembers childhood days sailing and swimming on Cape Cod’s Pilgrim Lake next to the cozy cottage her parents had built in the 1950s. 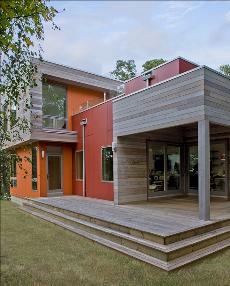 Over the years, the cottage in Orleans, Mass., fell into disrepair.English considered a complete renovation but, given the rotting wood, decided to start over.She and her husband Dan hired Boston-based ZeroEnergy Design, a firm that specializes in green building.”Both my parents valued the environment,” she says, adding her mom helped set up Orleans’ recycling program.English wanted to continue that legacy. 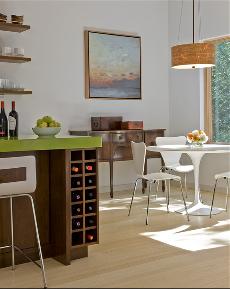 The result, chosen as “This Week’s Green House,” is a modern, ultra-efficient, solar-powered home, completed last August. It earned the gold or second-highest rating from the U.S. Green Building Council’s LEED (Leadership in Energy and Environmental Design) program. 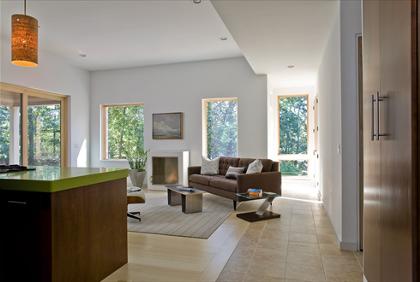 “It’s going to be actively used this summer,” English says, noting her sister, two nephews and stepchildren are all likely to spend time at the three-bedroom, two-bath retreat. English, who works in the Washington area, says she and her husband are considering moving there year-round when she retires in a few years.
The 2,000 square foot house stands out for its exterior mix of orange and red James Hardie fiber cement panels and, to blend in with the Cape Cod vernacular, cedar siding.”They knew they wanted modern,” says architect Stephanie Horowitz of the home’s open floorplan and boxy shape.She maximized its lakeside view by creating a rooftop garden and deck, made of Forest Stewardship Council–certified garapa wood. 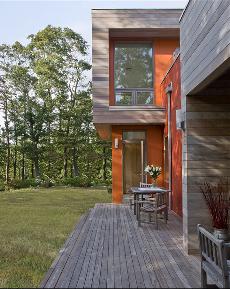 “The really privileged view is on the roof deck,” she says.

Horowitz, managing director of ZeroEnergyDesign, says her goal is to create the right aesthetic in as energy-efficient way as possible. She starts by creating a tight envelope or exterior.

“Think of it as a pyramid,” she says. “The envelope comes first, then the appliances, then renewables” such as solar or wind. The house has a 2.5 kilowatt rooftop solar array that provides 30% of the home’s electricity.

The English house, because of its lakeside location, needed to be able to withstand hurricane-strength wind, so the builder, Eastham-based Cape Associates, used extra framing. To avoid thermal bridging, it used both spray foam insulation and another layer of rigid insulation board. The above-grade walls have R26 insulation and the roof, R53.

Horowitz says its HERS (home energy rating score) is 39, which means its 61% more efficient than homes built to the 2006 International Building Code. Such homes get a score of 100; Energy Star home must score 85 or lower. A typical U.S. home scores about 150 while a home that produces as much energy as it uses gets the lowest score, zero.

She’s proud that the home is particularly airtight so little leakage occurs. (To circulate air, it has a whole-house ventilator.) On its blower door test, for example, it scored 0.65 air changes per hour at 50 pascals, which is very close to the 0.6 standard required for certification by perhaps the toughest green-building standard, the Passive House Institute.

Horowitz, certified as a Passive House consultant, has designed a 1,200 square foot house in Little Compton, R.I., to meet the institute’s standards. She and other members of her firm are Cornell University graduates who built Cornell’s entry into the 2005 Solar Decathlon, winning second place.

English declines to say how much her colorful new retreat cost, explaining that much of the tab depended on the decoratives finishes she chose, not the green building details.

She says she’s thrilled with its efficiency, noting she earned a credit this spring on her utility bill because her solar panels sold power back to the grid.