Ceiling styles give much needed lift

With murals, architectural features, and paint colors that wow, things are looking up for the long-ignored ceiling.

Read the article on the Boston Globe website here. 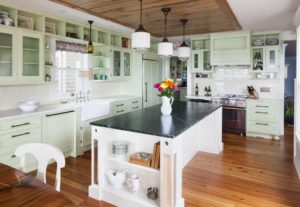 FALMOUTH — As a design writer, I tend to be the family expert when it to comes to home-decor trends. Four years ago, however, when we were renovating our kitchen, my husband, a fishing tackle manufacturer, trumped me.

In the process of bumping the room out six feet, we realized that an essential horizontal support beam would be dissecting the room in half. The room’s ceilings were low, and the beam stuck out awkwardly. My husband suggested installing beams to create a coffered effect. I was skeptical, but I agreed (I was getting my apron-front farmers sink, after all.) A few days later, he suggested adding bead-board panels between the coffers. His next idea was painting them sky blue.

Though I was briefly miffed that I hadn’t come up with the concept, I love the ceiling. It’s become my favorite feature in the kitchen. As soon as you walk into the room, your eye is drawn upward — our guests are constantly marveling at the ceiling. No one realizes that it was developed to mask a design flaw.

I now notice ceilings wherever I go. It used to be that featureless white ones were the norm. The thought being that they are too far from view to influence the look of a room. That’s no longer the case. Ceilings represent a lot of unused space in the house and can have as strong of an impact on a home’s interior as its walls and floors. In recent years, increasing emphasis has been put into the aesthetics of ceilings.

“I think about the ceiling as the fifth wall in a room,” said Dina Holland, a Boston interior designer who blogs athoneyandfitz.com . “They should be considered as a whole other way to create a design element.”

Holland recommends painting them a different color than the walls, particularly if your home has low ceilings. Lighter shades tend to enlarge a space visually. Darker hues have more of an enveloping appeal, so they’re good options if you have a big room you want to make feel cozier.

“People tend to think if a ceiling is low you shouldn’t do anything to draw attention to it, but that’s not the case,” Holland explained. “If you put anything on a ceiling, it draws the eye up so you’re not noticing the height.”

Wallpapering the ceiling is another way to add pop, providing an opportunity to be a little more adventurous.

“You may not feel comfortable wallpapering an entire room. If you choose to do just the ceiling, it’s less expensive, and the impact creates much more of a wow factor than if it was on the walls,” Holland said. When you put wallpaper on the ceiling, it draws your eye, and you get the full impact of the pattern without art or mirrors or anything else on top.

Hiring a decorative painter to create a custom mural on the ceiling is another option. “Everyone expects ceilings to be basic white,” said Stephanie Mesner, owner of Arteriors, a decorative-painting business based in Natick. “They offer a great opportunity to create a nice surprise element.”

Her clients’ requests run the gamut: from ornate scrollwork meant to emulate plaster reliefs to maps to tortoise-shell finishes. “Metallic finishes are a really big thing now,” she said. People like ceilings with silver leaf and painted metallic tones like bronze and copper.”

Matthew Cole of Cape Associates Inc., an Eastham builder, frequently has projects that call for various types of wood, V-groove, and bead board to be used to dress up flat plaster or run-of-the-mill drywall ceilings. “Nonstructural reclaimed-wood beams are popular,” Cole said. While setting a sustainable, rustic vibe, exposed beams can create patterns of light and shadow that visually break up large spaces.