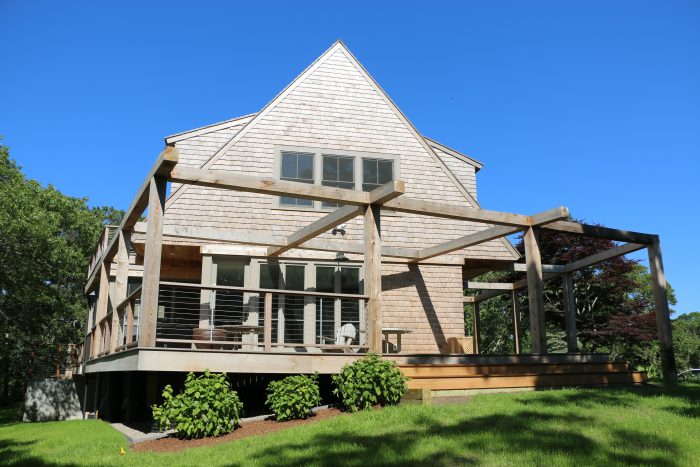 This new-construction home sits atop the original foundation of its predecessor on this beautiful Chatham lot. Building upon the existing foundation of the previous dwelling allowed the owners to keep the home’s place on a scenic rise, with incredible views of the surrounding area. And not only could they keep their view, but they would keep the original chimney which, they say, was the best part of the old house, full of character and charm.

The homeowners originally consulted with Hutker Architects, and had decided on a style they had seen on the firm’s website. The new home design would allow for an abundance of natural light and spacious living, both indoors and out. Incorporating natural elements were very important to the owners, according to Cape Associates’ project manager April Ducott. Attention to detail was key, and Ducott said the owners had specific elements they wanted to include in the home’s design, including Juliet balconies, private decks and a floating staircase. 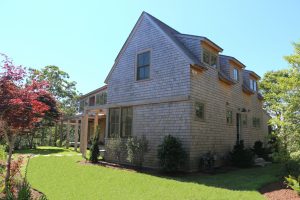 “The architect had the floating staircase and one of the Juliet balconies in the original plans,” Ducott said. “We, as the builders, had to figure out how to make it happen.  The owner added last-minute balconies off of the boys’ room as well, which we affectionately called the ‘Romeo Balcony.’” The balconies were created over finished space below, so a lot of thought had to go into a redesigned, weatherproof floor and an internal drain system.

In the spacious, modern kitchen, the owners decided on concrete countertops – a trend that is growing in popularity. “The owners like the laid-back, rustic feel of the concrete,” Ducott said. “It is not as polished or refined as marble, granite or quartz.” Included in the design was an oak waterfall island. “Waterfall” styles have a sleek, finished appearance, which continues down the sides of the island. “This started with some inspiration photos and a lot of collaboration between the homeowner and the cabinet designer/maker,” Ducott added. 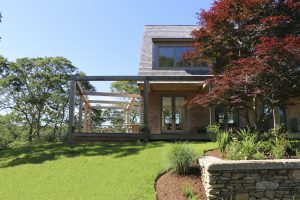 The owners were also very conscious of using eco-friendly materials in the construction of the home. “No plastic or PVC composite materials were used on the exterior of the house,” Ducott said. “The exterior is all-natural, unfinished red or white cedar and fir. They also used a product called Boral – a fly ash composite material – in areas where they wanted to introduce color.”  Boral, Ducott said, is good at holding paint. She added there is also an accent band above the front door which is made of galvanized aluminum. The decking and railings are made from Ipe (also known as Brazilian walnut) and, again, have no finish and are relatively maintenance-free.

To finish it off, they had a 5.045 Kw photovoltaic solar panel system installed to harness solar power. As people who love being outdoors, the owners can now enjoy the views not only from the many expansive windows and doors throughout the home, but also by simply stepping out onto the home’s multiple decks and outdoor living areas. Nature at its best.