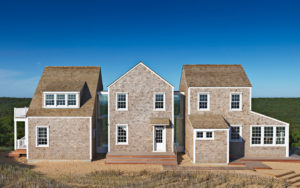 A sandy drive snakes through brushy vegetation for half a mile before reaching an austere, shingle-clad cottage at the edge of the dune. It’s a building type well adapted to this seaward extreme of Cape Cod, where wind-driven rain and sand argue against paint and fancy trim. But as you approach, the tidy house does something remarkable, splitting into three seemingly separate cottages joined by narrow, glass-walled links. The unexpected fission produces a sense of pleasant disorientation, but it’s no mere trick. On a site that can be as severe as it is beautiful, the combination of vernacular and modern themes represents both inspired aesthetics, and sound problem-solving. 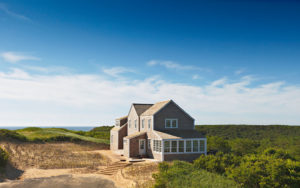 A summer residence for an extended family, the building replaces a weather-beaten older cottage that stood uncomfortably close to the dune’s seaward edge. Architect Wouter Boer says, “There’s such a microclimate there—with windblown sand and storm surge—that the cottage was in disrepair and wouldn’t have had much life left anyway.” Putting to rest any thought of renovating the existing cottage, builder Rich Bryant adds, “the edge was getting closer. The cliff was actually eroding closer and closer, at a rate such that it would have consumed the house in about 20 years.” The obvious solution was to rebuild further inland on the site.

“Where it’s located now is a little more stable,” Boer says, “but we were still very restricted in what we could build. There were height restrictions and footprint restrictions. We needed to break it into pieces, or else we’d get this very low, squat building. The challenge was to design a house that was unique but sort of fit the area, responding to the vernacular but having enough glassiness to capture all those views.”

Because the sand dune rises above the site, first-floor views are primarily away from the shore, so Boer configured the more exposed water-side elevation using traditional double-hung windows. “The vernacular worked very well on that side, because we needed small openings,” he says. 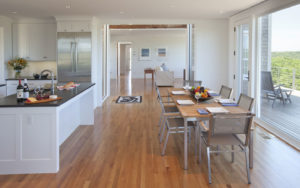 The house’s inland-facing side is more openly modern, with large panels of fixed glass framing a rolling green carpet of vegetation that runs to the horizon. “It’s almost like looking out at the ocean,” says Boer. Even here, however, he specified hinged rather than sliding doors. “Sand would get in the tracks,” he explains. Removable acrylic panels at all the house’s doors and windows protect the glass from sandblasting over the winter.

The building’s interior detailing, though arguably traditional, is so boiled down that it segues seamlessly to the building’s overtly modern elements. “The trim is very minimal,” says Boer, who drew inspiration from the carpenter minimalism of the Shakers. “We wanted the inside to be more modern, but still have that element of the vernacular come through,” he says, “and Shaker [design] is a very good precedent for developing a modern sort of architecture.” The stair, with its simple spindle balustrade, bridges that historical gap. “That becomes a feature,” Boer says, “but it’s not in your face.”

Moving from conceptual design to construction detailing, Boer says, the task shifted to more practical matters: “How do we integrate these modern elements? The glass links look simple, but it took a long time to get to something very minimal.” Bryant, with his years of experience building on the Cape, zeroed in on that feature right away. “The fenestration between the sections was certainly challenging—properly flashing that to the adjacent wood construction,” he says. “If there were an Achilles’ heel, it would be in that location. This site is absolutely brutal in the fall and winter.” 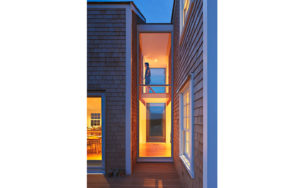 To keep the relentless wind-driven rain and sand at bay, Bryant constructed each floor-to ceiling pane as if its adjacent side walls, floor, and ceiling were window jambs, with the multilayer protection of flashing, rubber gaskets, and sealant. Removable polycarbonate panels that slide into unobtrusive metal tracks cover the sea-facing glass during the off-season. “Motorized roll-down shutters are popular,” Bryant explains, “but the moving parts tend to get damaged by sand.” Entirely hidden from view are steel moment frames around the large window-and-door units, a substantial collection of foundation, wall, and roof tie-downs to meet code in a 110 mph wind zone.

See more photos of this project in our online gallery here.