Still in its 1950s skin, this home was completely gutted, inside and out. It was a serious undertaking, as the homeowner wanted modern upgrades, while keeping an eye toward retaining the home’s 1950s charm. She had a vision for her home, and she stuck to it from beginning to end. Perched on a rise of land and overlooking the tranquil Wellfleet Herring Pond, the home initially appears split, with the guest house on the left, and the main house of the right, but both ends are connected with a breezeway. The original home’s bones were in good shape when Cape Associates took on the project, but many upgrades and replacements were necessary to bring the house up to contemporary standards.

Siding, roofing, gutters, insulation and mechanical systems were all replaced. Doors and windows with metal frames were custom-made in Long Island by a company that specializes in doors for office buildings. Modern heating and cooling systems were added, and the three bathrooms were all updated. The footprint of the home remained unchanged. Inside, the only blueprint change was to allow for more closet space. 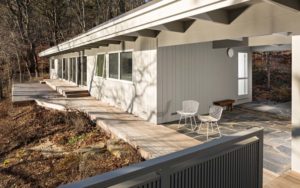 The attention to detail in retaining the 50s-style look took a lot of online searching, from handles and knobs to lighting fixtures, with bits and pieces arriving from all over the world, including a doorstop from New Zealand. The homeowner selected many of the fixtures, while a very detail-oriented foreman  (Ralf Creech) and project manager (Jon Ziperman) exhaustively researched as well, looking for just the right piece for each and every location.

High-end appliances were installed to modernize the kitchen and all of the old cabinetry was removed, replaced and refaced with NUVACOR, a versatile surfacing material that not only provides a sleek, modern look, but adds convenience and ease of use.

Bare, wood-beamed ceilings throughout give a nod to the home’s natural surroundings, while the main living area (formerly used as a fisherman’s cabin), with a brick fireplace, was completely trimmed in walnut. Multiple windows of varying sizes were added by Cape Associates to welcome sunlight and brighten the home. 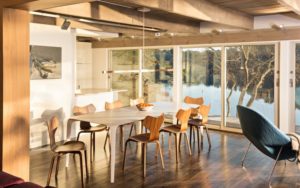 Behind the house sits the serene pond, which can now be enjoyed from the stunning new deck. Here, decking material was not laid out side by side as it typically is but, instead, meticulously laid out on edge. A railing of tempered glass panels allows unobstructed views of the surrounding natural beauty, and keeps consistent with the open, airy feel of the property. A new outdoor shower is accessible via the deck and left open to the wilderness and the pond below, completing the bold yet sophisticated feeling of this retro-modern home.