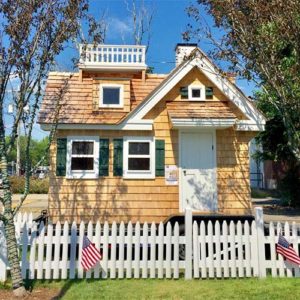 Cape Associates, Inc. and The John F. Kennedy Hyannis Museum are pleased to announce Blanche Hunnewell of Harwich Port as the winner of the “Bring History to Your Yard” Centennial Shed Raffle the museum held in honor of JFK’s 100th birthday celebration.

The Centennial Shed – a replica with details of the late President and First Lady’s Hyannis Port home – was built and donated by Cape Associates, Inc. to help raise funds for museum renovations that will enhance education and cultural programs facilities.

“The Cape Associates playhouse program got started in 2001 and has raised more than $135,000 for local organizations. This year’s collaboration with

Cape Associates and the JFK Museum began their collaboration in 2015 in preparation for the playhouse raffle to coincide with the 100th anniversary of JFK’s birth. Designed by Brian Foley of Cape Associates, Jesse Kinnane took the lead in constructing the playhouse.