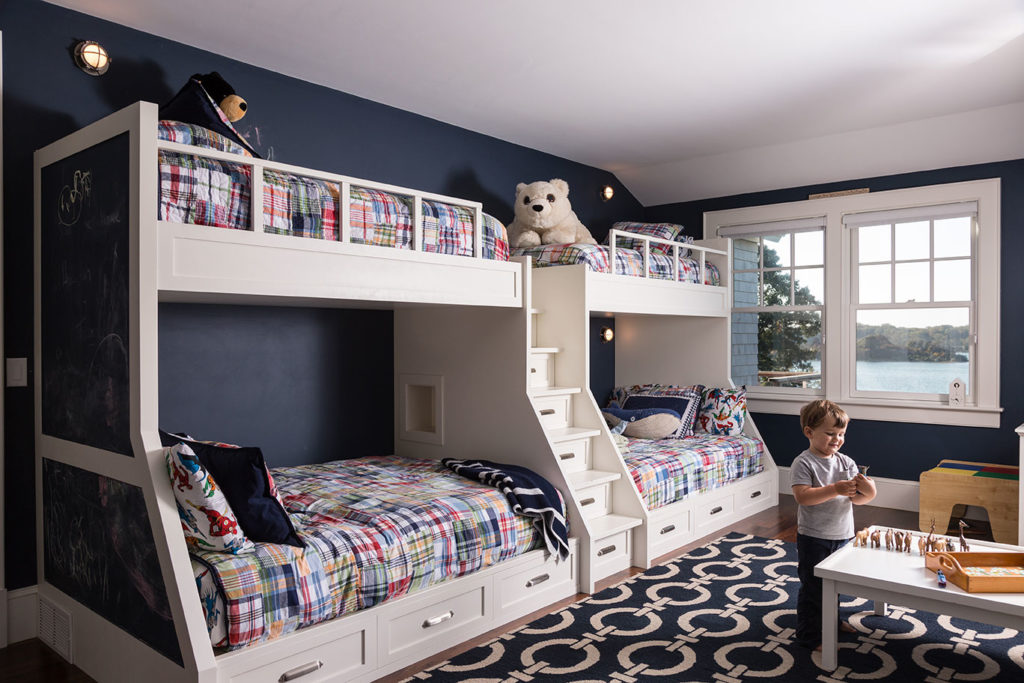 A husband, father of three young boys, and the president and CEO of Cape Associates, Matthew Cole wears many hats. In 2016, he took on the added role of project manager for the construction of his own family home, which overlooks beautiful Town Cove in Orleans.

It was important that the home be modern, functional and timeless, he says, and to be able to accommodate the family’s needs throughout the various stages of their lives. The resounding call for versatility is especially clear in the bedroomCole’s eldest sons, ages 6 and 4, now share.

“When we designed it, we expected that at least two of them would share that room, but which two would share would likely change,” says Cole, whose youngest son is 2 years old. The bunk bed, made of cabinet-grade materials, boasts a set of double beds on the bottom bunk and single beds on top for plenty of space for sleepovers with family and friends. Cole adds, “Their youngest brother, who has his own room, will a lot of times crashes with them. Quite often there will be all three of them in there.” 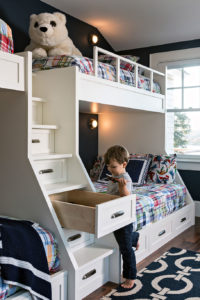 The multi-functional stairs leading up to the top bunks also provide storage for the boys’ Legos and other toys, which are already being swapped out for older-kid amusements like books and sports gear. Underneath the bunk beds, several individual drawers were built. “We had explored having additional mattresses pull out and decided that we didn’t need six mattresses; and, we looked at it being one large drawer, but that was going to be too cumbersome,” Cole explains.

Within each bunk there are individual reading lights and little nooks where the kids can store their treasures. “The reading lights are great,” says Cole. “The boys can be read to or read themselves and not have the light on in the whole room.”

Like the rest of the home, the boys’ bedroom has a subtle coastal feel. For a nautical nod to the home’s waterfront location, the bunk beds are painted white and the walls are awash in a matte Newburyport Blue by Benjamin Moore. The same shade as the wall was found in a chalkboard paint for the end of the bunk bed, allowing each kid to exercise his inner Picasso.

“We definitely made a lot of accommodations for their younger age,” says Cole about designing the room with his wife, Katie. “But we tried hard not to cater specifically to that age, with the understanding that in a couple of years they are going to be grown past that.”
—

Designed and built by Cape Associates
Photography by Dan Cutrona

See more photos of this project in our online gallery here.