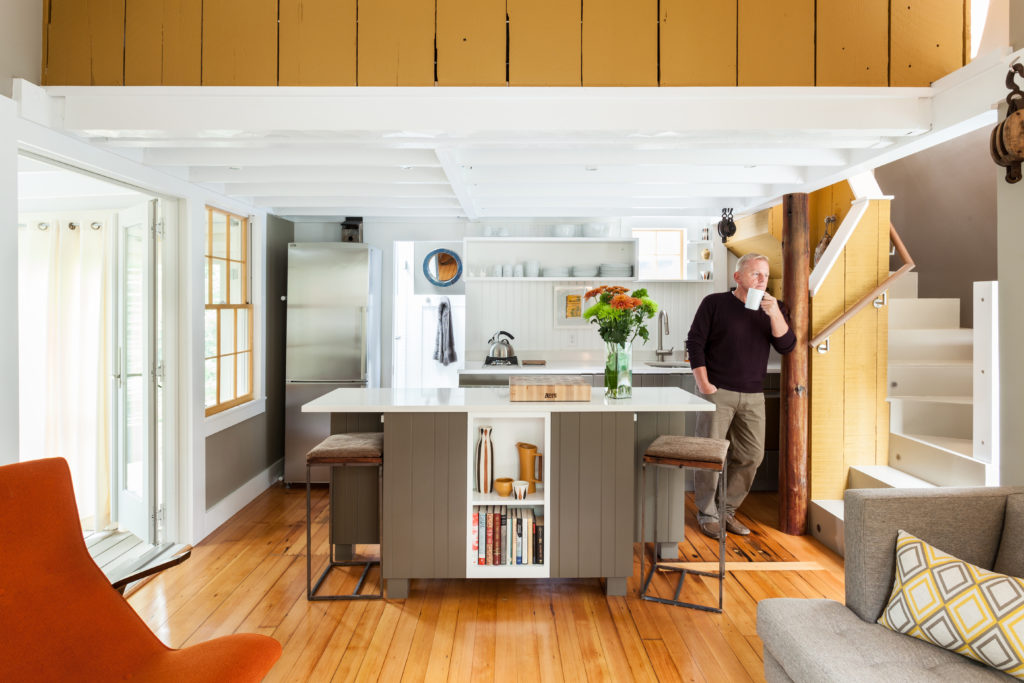 Cape Associates produces some of the finest custom homes on Cape Cod, Mass., but as manager of the company’s Provincetown operations, Derik Burgess deals almost exclusively with remodels. “They don’t let you tear down anything here,” Burgess says of the tightly clustered harborfront enclave. “Especially in the historic district, which is almost the whole town.” Given Provincetown village’s density, he says, “You’re always trying to put 12 pounds into a 6-pound hole.” Remodeling this 1940s-era summer cottage stretched even that metaphor to its limits. Designed by Washington, D.C.-based interior designer Christopher Budd for himself and his partner, Tom Lavash, the project manages to fit all the necessities of a year-round, high-minded retreat into a mere 350 square feet.
BUILT TO SCALE
“The existing cottage was essentially one room with a loft,” says Budd, who expanded the sense of interior volume by developing functional areas—kitchen, sitting, dining—while minimizing the physical barriers between them. The island, with its pair of nesting stools and recessed bookcase, serves as a visual and functional bridge between the kitchen and the living space.

“The living room goes into the island a little bit, so it’s not a complete barricade,” Budd says. The resulting combined space, while compact, is still scaled to the human body. A cathedral ceiling over the living room and a view to the loft ceiling above “give you longer interior sight lines than you would ordinarily have in such a small space,” he notes.
Strategically deployed, low-slung cabinets handle clothing storage in minimal volume and with total discretion. “There’s no coat closet in the entire plan, so I had to buy something with hanging storage in it,” says Budd, who scored something of a coup with a sliding-door cabinet that hides in plain sight amid the living room’s midcentury modern furnishings.
Read the Full Article Here or View the Project Gallery Here
Posted in Press & Awards