Watch the latest Cape Associates video to see a 7,000 lb. cupola being lifted onto the top of a three story building at the Cahoon Museum of American Art in Cotuit, MA.  By Cape Associates, Inc.

The Cahoon Museum of American Art opened its doors in 1984 to instant success. Occupying the historic Cahoon family home on route 28 in Cotuit, MA, the museum’s mission is clear — to promote love and enjoyment of the visual arts through exhibits, educational programs, and continuing development of the permanent collection.

In early 2014, thirty years after the original opening, the museum’s Board of Directors realized it was time to take a significant next step in order to better serve the community – to expand its space beyond the confines of the historic house it occupied and start a capital campaign to facilitate a major restoration and expansion. They named this campaign “A Legacy from the Past, A Vision for the Future.”

Cape Associates was hired to restore the existing two story, 2,968 square foot building, including replacing the foundation, structural repairs to the frame, and bringing new utilities into the space—this part of the project was completed in late 2014. Phase II of the project added another 3,705 feet of gallery, gift shop and classroom space, including a three-story stainless steel elevator.

Now comes the cool part—designs for the new gallery space incorporate a 160 square foot cupola faced with windows on all four sides to sit atop the 28 ft high roof.

Experienced Cape Associates Foreman, Pat Iachetta, knew that building a structure on top of a roof can be one of the most intimidating and statistically dangerous elements of constructing a building. The heights (here three stories) involve added risk, time and an immeasurable amount of effort for the project team. So Pat created a plan to build the 7000+ pound cupola on the ground and then lift it in to place with a crane. 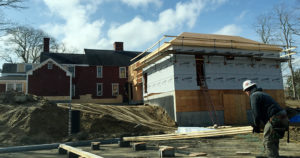 The team systematically arranged concrete blocks to the dimensions of the cupola on a generally flat paved surface behind the museum. They then proceeded to shim and raise the height accordingly with a slight level to obtain a square footprint and level surface to build on top of. The entire cupola was built on the ground — frame, windows and trim, fascia and soffit, and water barriers for the roof. When it was ready for lifting, temporary structural beams were added to carry the weight of the cupola during the four point hoisting maneuver.

By doing it this way, Pat reduced the risk associated with working at the extreme height, lowered the amount of physical labor involved in carrying materials to the roof, and saved time on the rigorous schedule. The speed and labor saved also easily offset the cost of a day’s crane rental and operator.

Craning a cupola (as well as a roof or other structure) is a relatively quick process. Watch the video here to witness the action that took place on April 21st, 2015 at the Cahoon Museum in Cotuit.

Baxter Crane provided the crane and the operator.